Resident Evil: Revelations (HD) is the latest installment in the well-established horror game franchise, developed and published by Capcom. The game returns to the survival horror roots of earlier installments, placing more emphasis on limited ammunition, exploration, and puzzle solving, but utilizing the over-the-shoulder viewpoint and control style of the modern Resident Evil games. For fans of the classic Resident Evil games who also love the action and intensity of the modern games, this game is a satisfying amalgamation of old and new that delivers one of the best Resident Evil experiences in recent years.

The main game mode is divided into multiple episodes, with multiple playable characters and story arcs. Players primarily take control of protagonists Chris Redfield or Jill Valentine, often accompanied by an AI partner. There is also Raid mode, where the player fights hordes of enemies with either an AI partner or another player online.

The primary enemies are the Ooze, pale, amorphous creatures that move slowly much like the standard zombies, but have the ability to flow through any openings at any time. This significantly increases the tension, as these enemies will often appear unexpectedly and seemingly out of nowhere. The boss creatures are also impressive and quite memorable, each typically requiring some unique strategy to defeat. Other classic enemies such as the hunters and dogs additionally make an appearance in other episodes.

The majority of the game takes place on a derelict cruise ship, full of dark corridors and unsettling, claustrophobic environments. You will likely find yourself apprehensive going around corners, reloading frequently, searching every room for ammo/items, thinking you are safe only to realize that you are suddenly surrounded by enemies. And if you play the game on Infernal mode, then prepare to amplify the tension exponentially as you will likely be facing hordes of enemies fairly often with very little ammo. There are also some unique game elements to make things more interesting, such as the new Genesis scanner that can search the environment for hidden items, special dodging and melee attacks, and weapon customization options.

Best of Old and New: This game is a refreshing mix of classic and modern Resident Evil, incorporating some of the best aspects of both.

Awesome Bosses: The boss battles are exhilarating and unforgettable, with each creature often requiring some unique strategy to defeat it.

Great Story: Despite its general ridiculousness, the story is well-executed and has lots of surprising plot twists to keep things interesting.

Raid Mode: This game mode can be very addicting and has a fair amount of challenge and replay value. Good luck beating the Ghost Ship level! 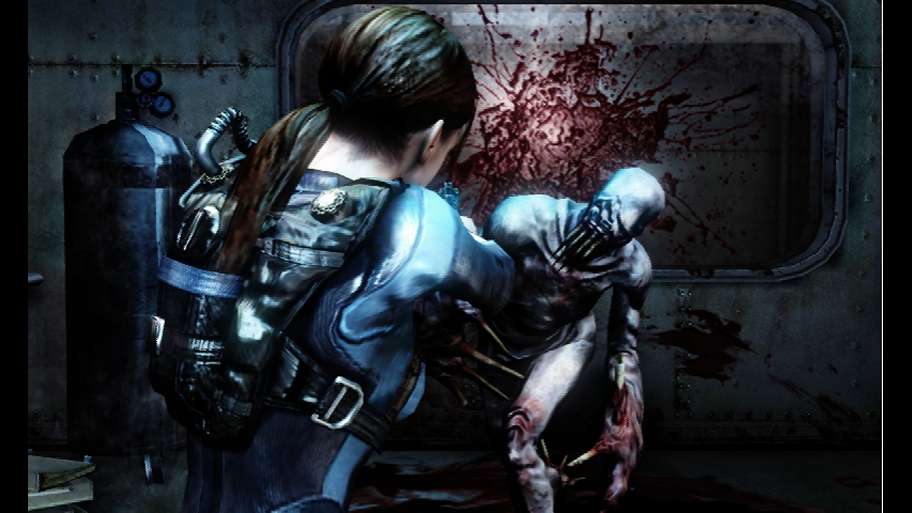 Inconsistent AI: Although not a serious issue, sometimes the AI partner just stands around and does not attack enemies.

Backtracking: Sometimes it is not that clear where to go next and some backtracking may occur as a result.

The game is a welcome return to the survival horror roots of the franchise, while still retaining the intensity of the modern games. Both old and new fans should have a great time with this game.